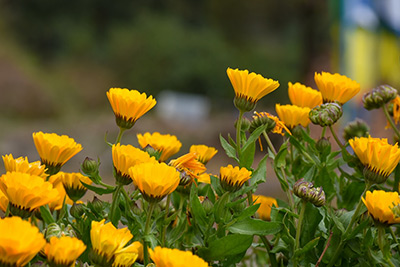 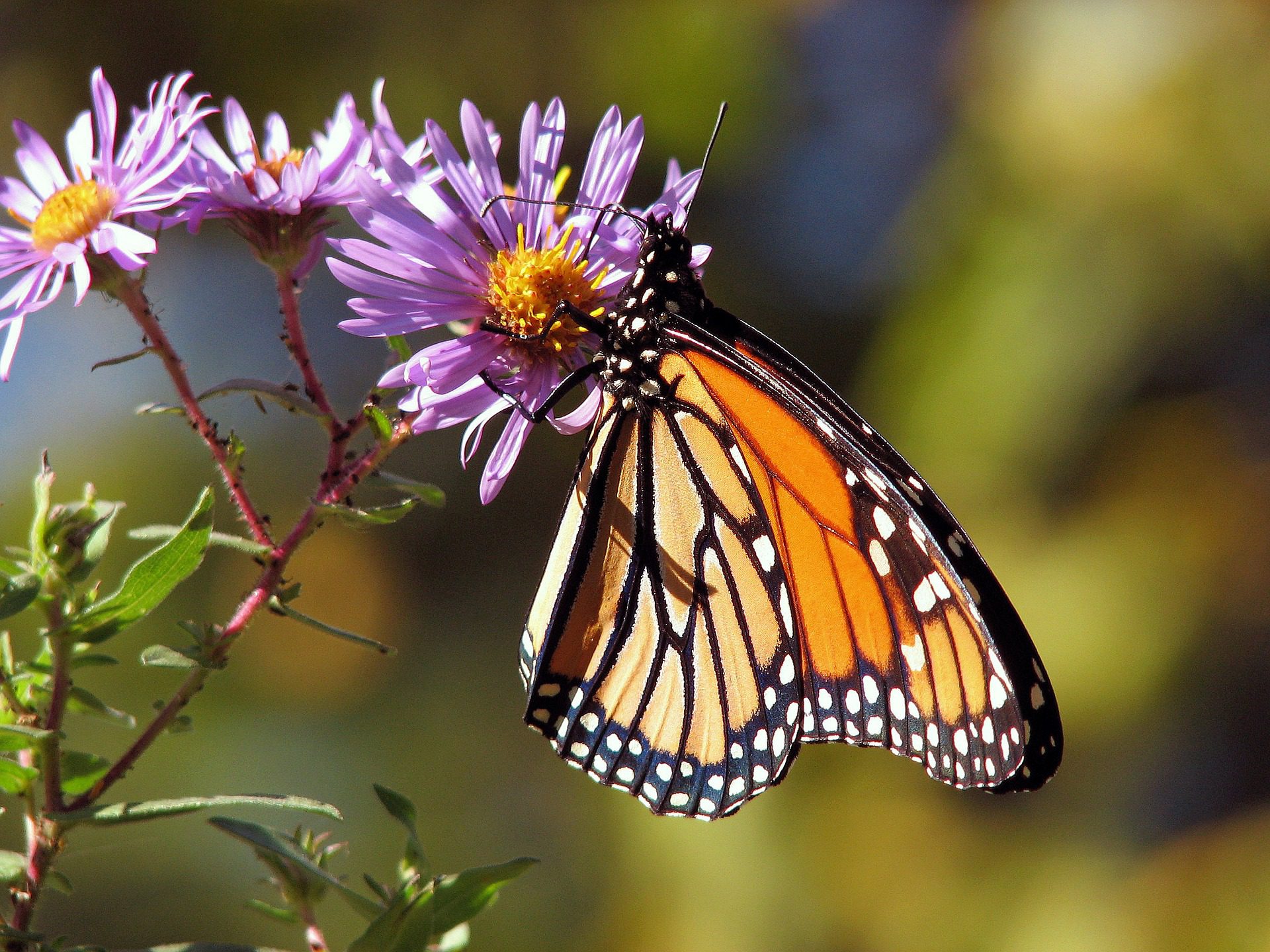 Friends of the garden: the little helpers

Tips to promote the presence of auxiliaries

Friends of the garden: the little helpers

In the garden, everything has a place in the food chain. It’s up to us gardeners to promote, by simple gestures, the presence of auxiliary animals. Many animals have a beneficial action for the garden. By feeding on insects or rodents, they avoid or limit crop damage. These volunteer helpers are called auxiliaries. These auxiliaries therefore regulate the populations of undesirables by participating in the increase in fruit production or by stimulating the vigour of the plants.

Lepidoptera: these are butterflies. Moths and butterflies usually feed on the nectar of flowers. 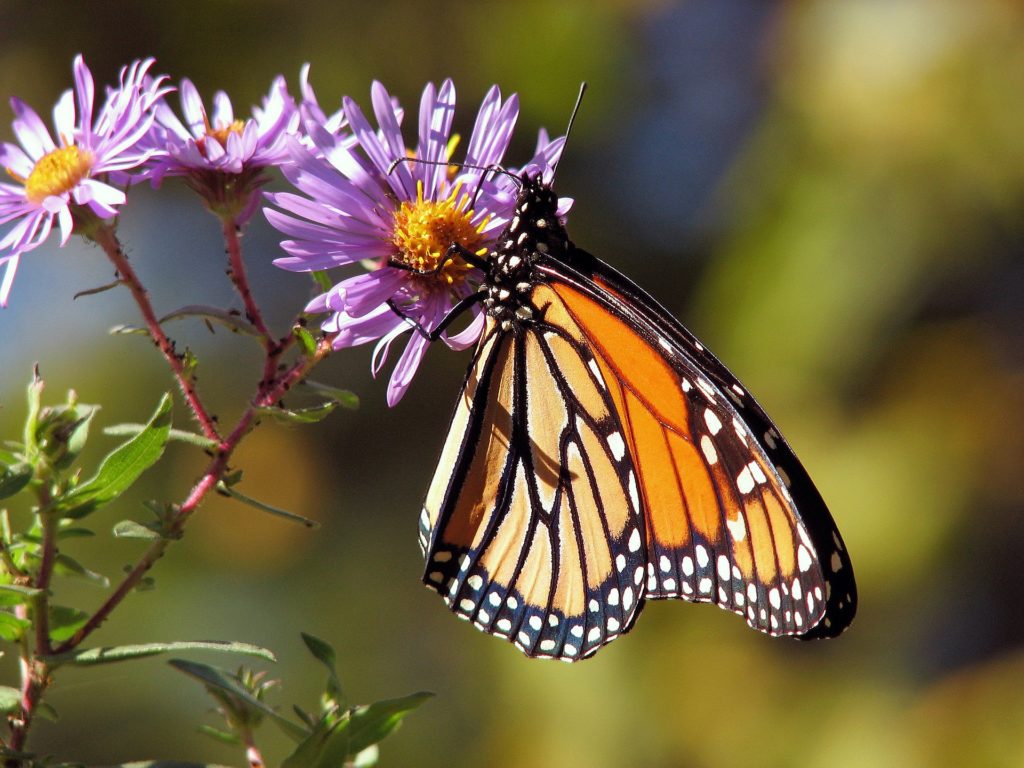 Hymenoptera: includes many pollinators such as bees (honeybees, wild bees: we often forget them, but the latter play an essential role in the reproduction of plants), wasps, bumblebees, or ants. 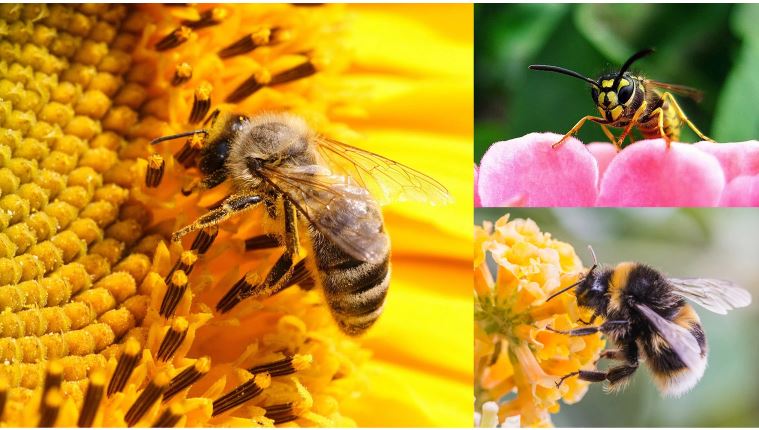 Photo of bee, wasp and bumblebees

Diptera: flies, but also Syrphid flies and bee flies are part of this order. These insects feed on pollen and nectar. Often small they pollinate small flowers, neglected by larger insects. 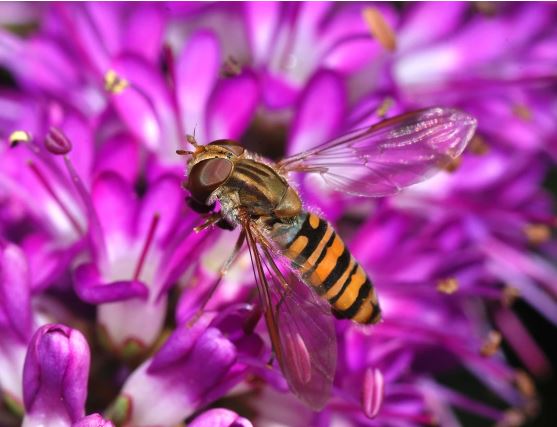 The syrphid flies, small fly 8 mm to 10 mm long, look like wasps with a golden body streaked with black. Easy to spot by their very fast zigzag flight. Larvae are small, flattened maggots that crawl on plants looking for aphid colonies. Very voracious, they can devour from 400 to 700 during their existence of about ten days.
These flies often mimic the shapes and bright colours of certain species of Hymenoptera. They are often found in summer on flowers, mainly Umbelliferae, seeking the nectar on which they feed and thus contributing to their pollination. The larvae feed on waste, flower bulbs, aphids or larvae of other insects depending on the species.
The syrphid fly larvae are interesting auxiliary organisms in crop protection. They are effective biological control agents against aphids specifically. The larvae can consume hundreds of aphids in a few days.

Beetles: these are all “shelled” insects, such as beetles, gendarmes or ladybugs. Among the pollinating beetles, let us mention the rose chafer (whose larvae are very common in compost bins), but also the common trichia or even the noble edema, which is often seen on flowers.

The rose chafer is a small insect of the Coleoptera order very common in the garden. Recognized by its metallic green shell, with golden reflections. Clumsy looking, this beautiful insect likes to visit flowers: you will often see it in the middle of the stamens. Rose chafers are all the more numerous in a compost heap, so they find an ideal environment to reproduce. The larvae are found in leaf litter, dead wood, or mulch. 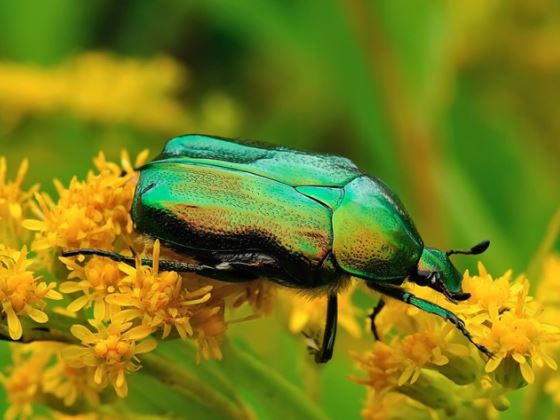 They aerate the soil and absorb organic matter (notably the microscopic fungi that abound in soils) and thus prevent the development of many root diseases. They participate in the mineralization and humidification of the soil by breaking down organic matter, promoting the bioavailability of nutrients for plants and micro-organisms. They are considered keys species. 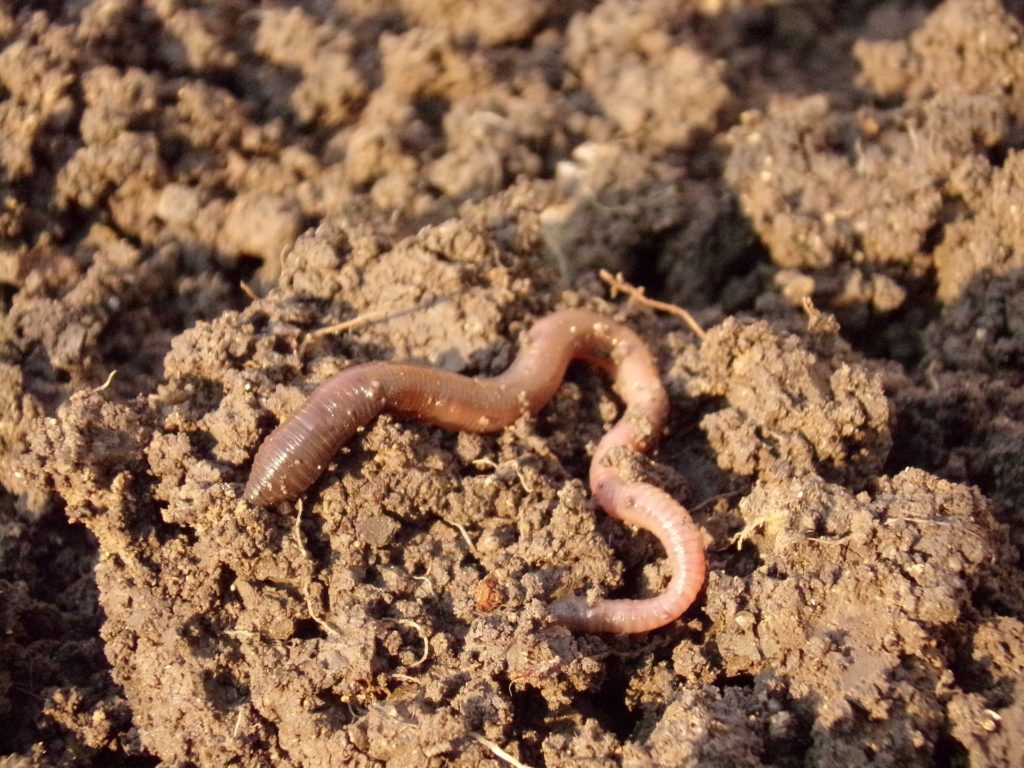 Earthworms Make the Soil Fertile
Earthworms are the architects of fertile soils, and they’re also called soil engineers. Their influence is highly variable. They deposit large quantities (order of magnitude: from 40 to 100 tons per hectare and per year) of droppings in the ground (approx. 40%) and on the surface of the ground (approx. 60%).

Earthworms aerate the soil
The galleries dug by earthworms ensure good aeration of the soil and increase the proportion of coarse pores.

Earthworms increase the soil’s ability to absorb water
The stable and vertical galleries of earthworms particularly significantly improve the absorption, storage, infiltration and drainage of water in the soil, which greatly contributes to preventing runoff and erosion. There are up to 150 tubes per m2 in unploughed soil, which represents 900 metres of galleries per m² over one metre deep. These vertical galleries stabilized by the mucus excreted by earthworms can reach three metres in depth in deep soils on loess, and even six metres inland.

The toad has a reputation as a big eater of slugs during its nocturnal outings. 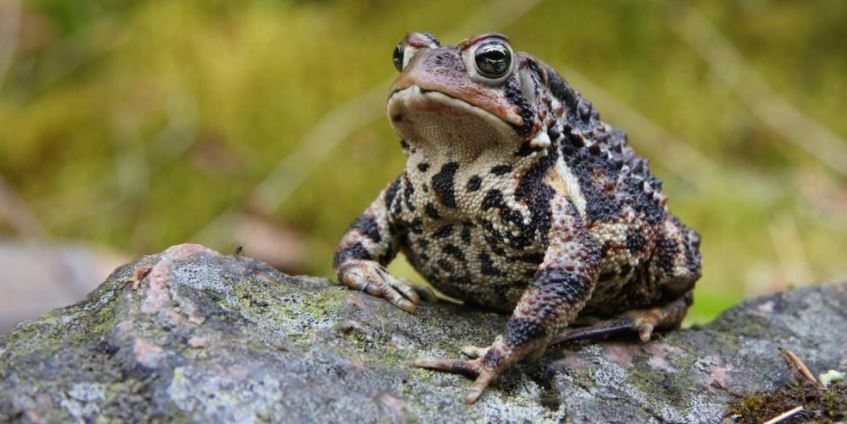 What do toads eat?
Toads are agricultural helpers. This means that they’re useful in the fields and in the gardens. When they reach adulthood, they feed on:

A toad shelter in your garden

If you want to benefit from the help of a toad to fight against pests, slugs and spiders for example, build him a habitat so that he feels good in your garden. Know that he likes the small damp and dark corners in which he shelters during the day. To make a shelter for it, you can use a few large stones; plates of bark; a pot preferably in stoneware that you just have to turn over; small planks of untreated wood.

Choose the solution that suits you best and create a toad shelter, leaving an opening of about 5 cm. The toad will be able to come and go as it pleases and perfectly fulfill its role as a natural insecticide in your garden.
Good to know: the toad is a fervent defender of lettuce, playing a crucial role in the regulation of invertebrates fond of these green leaves: slugs, earthworms, caterpillars, etc.

They devour countless undesirables in the garden such as aphids, scale insects (small parasitic insects, biting and sap-sucking) or mites. 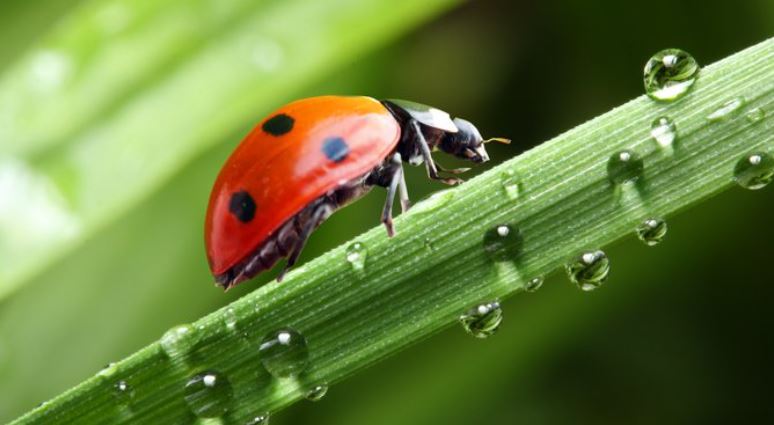 How to attract ladybugs to your garden?

To attract ladybugs to the garden, the technique consists in eliminating the use of pesticides. Then, it’s advisable to give preference to a rich and natural flora in the garden. Beans and nasturtium are some of their favourite plants. By growing them in your garden, you’re sure to attract the pretty red bugs with black spots. It’s also recommended to plant certain species of flowers such as wormwood, borage, knapweed or Anthemis; ladybugs love it. However, if you want to save time, it’s possible to buy ladybug larvae (photo) or adult ladybugs, either on the internet or in garden stores.

Frogs catch many insects in flight. 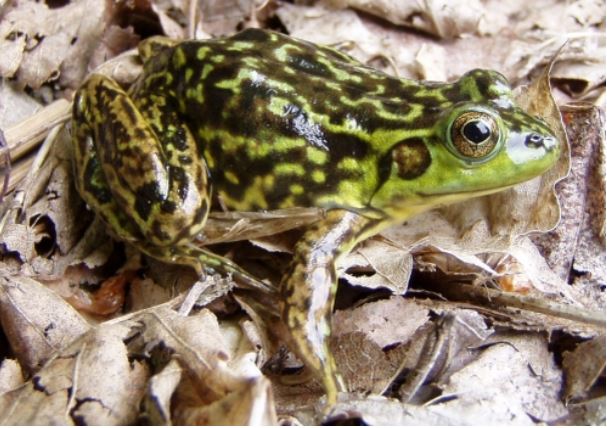 The frog, once adult, becomes carnivorous: insects of all kinds (flies, butterflies, dragonflies…) caterpillars, worms and other molluscs are in ther menu. They’re therefore valuable garden helpers that work especially at night. If you want to attract frogs, it’s imperative to include moist areas or at least cool places like piles of stones, tiles or boards. Green manures and tall grass serve as cover for frogs. But for them to reproduce, the frogs must have a water point: if you don’t have a natural pond, you can create one without fish that would eat tadpoles, and with a gentle slope to facilitate access. Be careful, it’s forbidden to move these critters so you will have to wait for them to come and settle there! Rest assured, your pond won’t be a source of mosquito infestation, because the tadpoles will feed on their larvae without giving them time to develop.

The winter wren (small insectivorous bird) makes its nest in the hedges. It feeds its young with a large number of insect larvae. 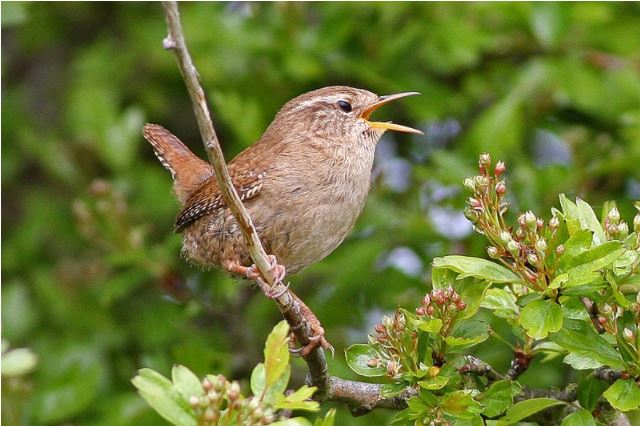 Welcome to our new website! Accounts on the old website have not been transferred, so we encourage you to recreate one. You can use the same information.